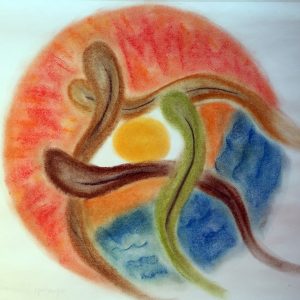 As a person with white skin and European ancestors who were part of the colonization of the native peoples and the land where I currently live and work in central Texas, it is important that I first acknowledge the Tonkawa nation as the true and rightful guardians of this land and the ecosystem of bison, deer, wolves and other animals and plants that once lived here in a state of interdependent harmony.  Thousands of Tonkawa lost their lives at the hands of European colonists, whether through violence, disease, the destruction of their primary food source or invasion by other tribes forced south and west in response to the white flood moving across the country. Those who survived lost a way of life that was sacred to them and suffered the psychological, emotional, physical and spiritual trauma of having their land taken from them through trickery and betrayed agreements while being forcibly relocated far north to land in Oklahoma which had never been part of their territory to begin with.

The Tonkawa people continue to be a strong and vital tribe now located in northern Oklahoma and I encourage you to read more about them and their history on the Tonkawa Tribe’s official website: http://www.tonkawatribe.com .  The ancestors of these skilled hunters, warriors and healers continue to teach me much as I bear witness to their story at each land clearing/alignment I am privileged to facilitate.

I also want to acknowledge the teachers in this physical plane with whom I have been privileged to work.  These beautiful, wise and generous souls have greatly enriched my journey and while not all of them may self-identify as someone who follows a shamanic path, they have all contributed to the soul learning that is ever-evolving within me in ways that I will never truly have the words to articulate. They include Karen Hutchins, Elizabeth Quigg, Ruslyn Smith, Kalila Homann, Amber Gray, Nanine Ewing, Edwin Tamayo, Suzanne Hastie, Lucy Griffith and Christine Stevens.